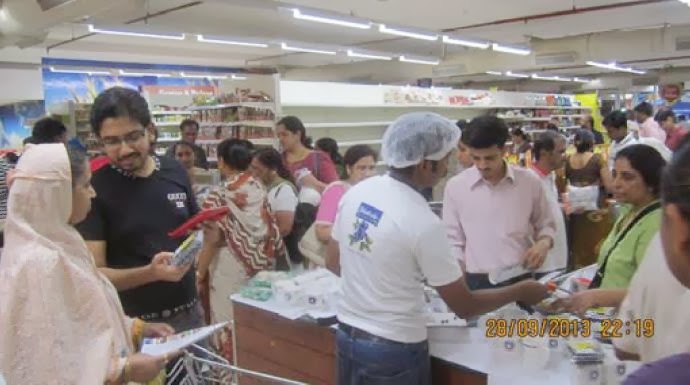 More than 150 years ago, a exporters in the US Northeast successfully completed their first sea shipments of lake ice to Calcutta in India. The ship was specially insulated with straw to keep the ice from melting.  From a cargo of 100 tons, around 15 tons survived.  The wonder-ice was cherished in the expat enclave of this bustling English-colonial city.   This year marks the second year that fresh blueberries from the USA have been shipped to far away India.  The blueberries are picked in the morning and taken to the airport --while maintaining a "cold chain."   Product is packed into air containers with cold gel packs and raced off over the poles to routes in Southeast Asia or Europe on the way to India.  Upon arrival, the fresh blueberries are loaded from planes to customs facilities at the Indian airports.  Since this is a new item, the Indian customs pay a lot of attention to the blueberries.  After clearance,the fresh blueberries are placed in refrigerated trucks with special care to keep the blueberries away from the high heat and humidity of India.   Within hours of landing, the fresh blueberries are delivered to hyperstores in the big cities such as Mumbai and Delhi and the other booming cities of the south including Bangalore, Hyderabad and Chennai.  These cities now have huge tech centers and call centers in the suburbs that have generated dozens of mega-Malls with high-class western style supermarkets such as Hyperity, Big Bazaar and Food World.  Hundreds of thousands of Indians either work for western firms or have experience abroad in the USA and Europe.  When they return they often yearn for blueberries!   As unlikely as it may seem -- fresh blueberries have become a prestige item. The market is small but steadily growing.  Day to day, articles are published in the Times of India on the health benefits of blueberries.   Look for India to become one of the leading markets for fresh blueberries in the world!

Posted by Blueberryguy at 4:46 PM