Each year, USHBC exhibits at the annual meeting of the Institute of Food Technologists (IFT).    The meetings are rotated from areas of food processing, such as Chicago and Minneapolis to destinations such as Las Vegas, Orlando.  This year the meeting was held in New Orleans, Lousiana.
Did you know that blueberries are grown in the South, not far from the Crescent City.    Drive north towards Poplarville, Mississippi and you will drive right through the growing region.   Most of the blueberries produced in the area are from a Southern native species called Vaccinium Ashei.  This member of the highbush blueberry family is native to the south and is found in East Texas, Georgia, Louisiana, Mississippi and Louisiana and Alabama.   The blueberry is commonly called the "rabbiteye"  because the unique look of the calyx.   For the IFT meeting, we had the pleasure of working with the local growers and Mr. Ethan Goggans of Sandy Run Farm in Purvis, Mississippi helped out with the booth and did an excellent job.   He brought several blueberry plants from the farm which were on display and this was a big hit -- especially with foreign visitors.  http://www.sandyrunfarms.com/    Note: the Mississippi State University cowbell on display at the booth. 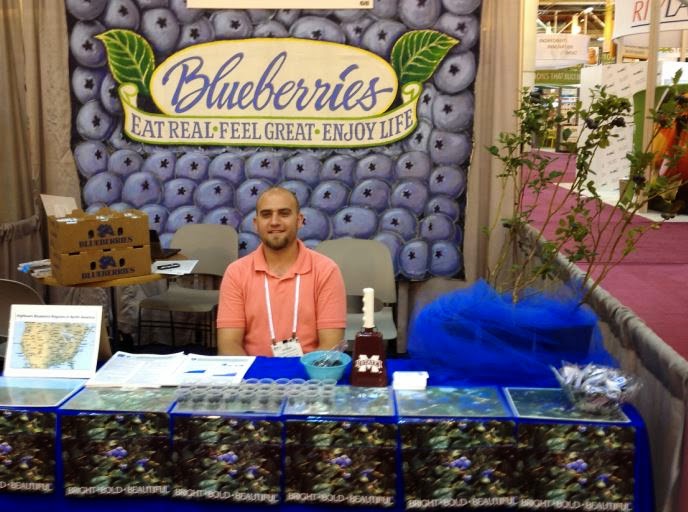 Posted by Blueberryguy at 12:15 PM