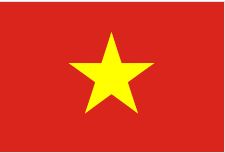 It has been more than 40 years since the end of the Vietnam War and only ten years since the opening of trade between the Socialist Republic of Vietnam.  Trade relations opened trade in 2001!
Now we see one of the most USA friendly countries in the region.   A new generation of consumers are exposed to information on blueberries and health and beauty in newspapers and magazines and foreign travel and exchange with the huge diaspora in the USA.
USHBC participated in the 2015 Food and Hotel Vietnam Exhibition in April 2015 in Ho Chi Minh City (Formerly Saigon) , and we were amazed at the interest:
>(Ultra-high-end) Supermarkets were stocked with fresh blueberries from the USA.
>Products with blueberries including yogurts, beverages and dried blueberries were produced by large modern food manufacturing companies.
>Small amounts of fresh blueberries were also grown in the Đà Lạt highlands for local consumption.
but
Currently fresh blueberries are restricted from the Vietnam market but the North American Blueberry Council (NABC) and US Highbush Blueberry Council (USHBC) are working with the US Department of Agriculture for market access.

Demand Determinants:
>Vietnamese consider blueberries to be a beauty aid.   The concept of "Beauty from Within" is traditional in this culture and items like mulberries, and blueberries are considered to be good for the skincare.
>Vietnam is connected commercially and culturally to the rest of the Southeast Asian markets such as Singapore where blueberries are readily available and appreciated.    Media continually features blueberries in beauty magazines, television programs and newspaper accounts.
>Vietnam is a major sugar producing country and manufacturers are churning our jams, jellies and sauces for the domestic and export markets.

We are confident that this will become a multi-million lb. fresh market in the future and a significant user of frozen and dried.

Here are just a few images of Vietnam! 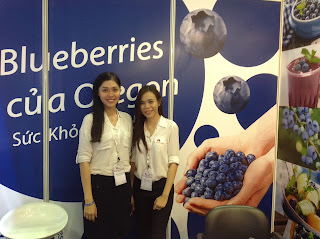 Here are the two beautiful young ladies working in our booth.  Both speak perfect English, are training for work in the hospitality (Hotel) business and both love blueberries!   Ask they why and they will point to completion! 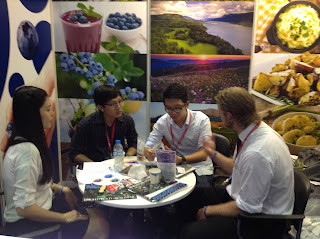 From a commercial standpoint, the Vietnamese are pros.  Here is a discussion on dried blueberries in the Oregon Blueberry Booth. 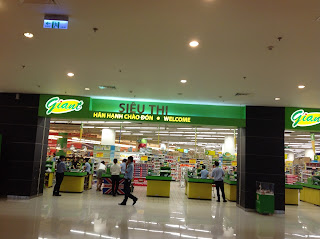 Here is a Giant (French Owned) Supermarket in District 7 of HCM City.   This was in the basement of a multi-story shopping mall which would rival any USA high end shopping center. 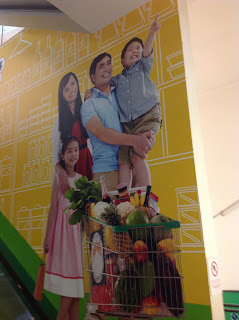 In the past, Vietnamese were surrounded with "progress" posters and other propaganda with workers pointing to the new beginning.   Here is a poster of the new "happy family" on the escalator heading to the Giant store. 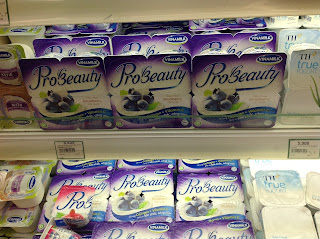 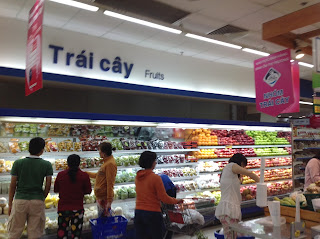 Here is the produce section of the grocery store.

Posted by Blueberryguy at 2:13 PM