When visiting South Korea, you will see a coffee shop on every block.  They are everywhere. USHBC works with Korea Business Services Inc. in Seoul to work on the franchise foodservice market.   From the looks of the following report -- blueberries are on the rise in this lucrative market segment.

According to the Korea's Dessert/ Food Service Market Report by Korea Agro-Fisheries & Food Trade Corporation (aT), the market size for cafe business reached to $2.5 billion in 2014 which grew from $436 million in 2007. The report noted that franchised cafe businesses notably grew from 1999 when the Starbucks firstly opened its stores in the Korean market. As the market has grown, cafe businesses have tried to diversify their menus not only selling coffee menus but also providing fruit juices, iced flakes, ice creams and desserts. Below Figure 1 shows Korea's Cafe Business Growth for last several years. 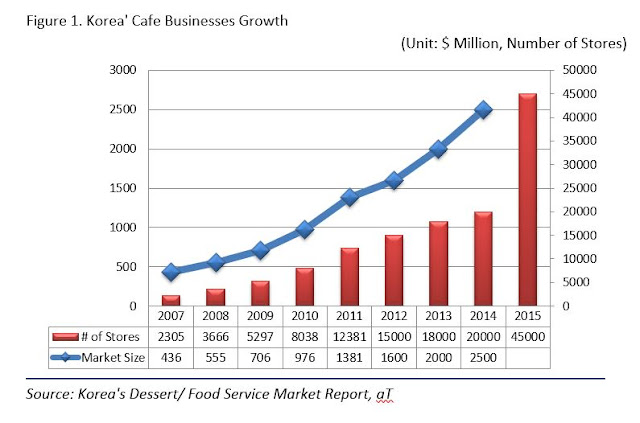 Among others, there are 10 major café brands which lead the market as show at Table 1. Ediya Coffee, the pioneer of the café business in Korea and opened in 1994, has the strategy to set lower prices of menus than other franchised coffee stores. Also, it is noted that 2 US brands, Starbucks and Coffee Bean & Tea Leaf have been greatly successful in the Korean market. Otherwise, it is also notable that large scale food companies are operating franchised coffee stores such as Angel in-us Coffee by Lotte, A Twosome Place by CJ, Pascucci by SPC Group (Paris Croissant) and Paul Basset by Maeil Dairy. 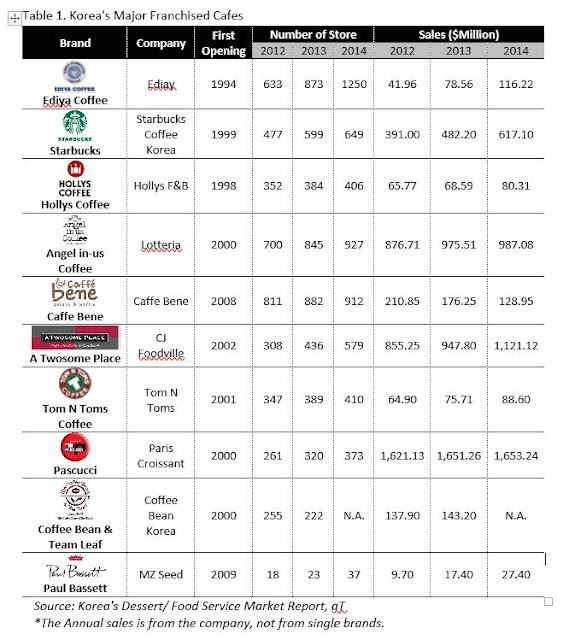 Blueberry Use:  Check out the number of new blueberry foodservice developments this year! 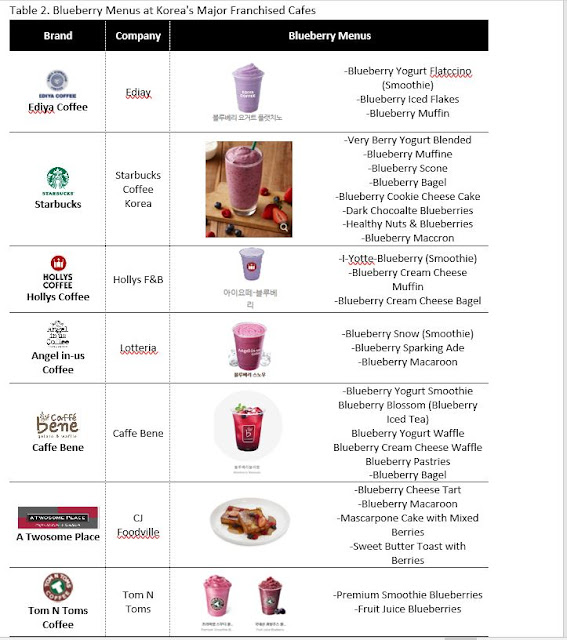 Action!
This year we have a dynamic slate of foodservice activities to engage and encourage foodservice outlets to innovate with USA blueberries.

>Culinary Boot Camp -  Blueberries are on the innovation menu for this yearly event sponsored by the USDA-Agricultural Trade Office (ATO) Seoul.   Management and product developers from major chains like the ones above as well as trend setting independent operators will attend.   Our Seoul-based blueberry representatives will present new idea and concepts and talk promotions.   This is the start of ideas which will result in new menu items down the line.

>Seoul Foods 2017 -  USHBC will participate in the upcoming Seoul Foods exhibition to be held May 16-19, 2017 in Ilsan (a suburb of Seoul).   This is the largest and most important food exposition of the year in Korea and USA blueberries will exhibited.   This year we will show a whole array of blueberry sauces which integrate the goodness of blueberries with the savory tastes craved by Korean consumers.

Check out the new menu items this year!


Posted by Blueberryguy at 4:35 PM