The USHBC strategic plan directs us to keep a steady effort in the major potential usage markets abroad, and this has led us to Asia where we promote in , , and others.    At the same time we are also encouraged to explore new markets with longer term potential, such as .   In November 2014, USHBC conducted its first trade mission to one of these markets of the future: .  We were pleasantly surprised to see great enthusiasm for fresh, frozen and dried blueberries everywhere,   Turks have a "food as medicine" philosophy.   Blueberries are considered a beneficial food for a whole range of health reasons.   Blueberries are especially popular with the young generation who read about "super fruits" in newspapers, magazines and internet blogs. 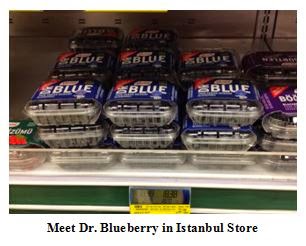 Posted by Blueberryguy at 3:58 PM