The Association of South East Asian Nations (ASEAN) is an organization of ten Southeast Asian countries.  It was formed in 1967 -- originally with Indonesia, Malaysia, Singapore and Thailand as the founding countries.   The nations of: (alphabetically) Brunei, Cambodia, Laos, Myanmar (Burma) and Vietnam have joined.  ASEAN aims to accelerate economic growth of its members, promote social progress, and provide a body to help with political stability.

Last year Singapore imported more than $2 million USD of US Blueberries.  Malaysia, Thailand and the Philippines are all ramping processed blueberry imports for the food industry.USHBC is continuing to promote in the region. 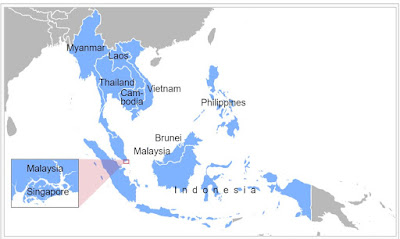 USHBC is targeting this fast growing region for market development activities.   Note than currently most action has been in Singapore, but note that quite a bit of product landed in Singapore ends up in places like Malaysia and Thailand. The Philippines  - -was once an economic powers in the 60s and since have fallen.  The country is on the rise again and Filipino food companies are operating all over the region.  We even have Filipino fast food outlets on the West Coast such as Jollybee, Chow King and Seafood city Much of the Philippine food business is controlled by old-time Chinese-Filipino families.   Filipinos love good food, and are familiar with blueberries from the past contact with US military bases and the huge diaspora of Filipinos in the USA.   Every Time I have flown to the Philippines I marvel at all of the "Balikbayan" boxes (repatriate box) with blueberries!  In September, USHBC will conduct a trade mission to Manila to assess market channels and size.  We will meet with importers and food processors.  In the next year we will also work with the Filipino Chinese Bakers Association on trade shows and bakery seminars.

The Democratic People's Republic of Vietnam -- our former war enemy in the 60s and early 70s is still a Communist dictatorship, hard working and clever businessmen and women.   They love good food and have a blueberry tradition from the former US and French times.   Vietnam has a booming food industry in dairy, baking, snacks.   Already we are seeing real blueberry containing products made from frozen blueberries and local sugar.   Vietnamese consider blueberries to be a beauty ingredient and you will see cosmetics, "beauty beverages" and all sorts of innovative uses for blueberries.  Currently, USHBC and NABC are working with the Vietnamese government through USDA-APHIS to obtain market access for USA fresh blueberries.

Singapore  --  is the smallest (by territory) and most advanced economic power in the region.  PEr capita income is on par with western countries.   It is hub of high tech, banking and regional food industries.   Singapore has a huge expat community of Europeans, Americans and Japanese who rely on western style grocery chains such as Cold Storage to serve up their fresh blueberries.   Although a huge amount (amount) of fresh blueberries go into Singapore -- a lot travel further into neighboring countries lke Malaysia, Indonesia and Thailand.

Malaysia --  is a former British Colony and attached to Singapore.   Malaysia is a Muslim country with a strong tradition for good food.   Many of Malaysia's food businesses are operated by Malaysian Chinese families and they  also  operate regionally with plants all over the region.  Modern Malaysian grocery stores feature blueberries in the produce section year round.  Dried blueberries are also gaining popularity especially during the Ramadan (fasting months).   Shippers into Malaysia may need to be aware of Halal certification requirements.

Indonesia --  is one of the largest countries on earth with more than 200 million population spread out (end-to-end)  over an area larger than the USA (coast to coast).  It contains more than 18,000 Islands.   Fresh blueberries are available in most big cities such as Jakarta, Surubaya and Bali year round and with more demand we will see more.   Indonesia has a massive food industry with more than 15,000 companies stretched all over the country.  Indonesia food processing includes all of the local produced commodities such as palm oil, sugar and others.   But, the country has also developed a rising medium and small business food industry for candy, snacks, dairy and beverages.  Most food companies are owned by Chinese and East Indian families.   We are currently conducting research on the Indonesian market and will report soon on potential in this vast land! Thailand --  has been experiencing blueberries for the past decade as some of the most popular flavors of ice cream are blueberry.   Thai people love blueberry and now if we can only get real blueberries into some of the products identified as blueberry!    Fresh blueberries are available year round in the modern supermarkets of the major cities.   Thai food processing companies are quick to integrate processed blueberries into value added products such as baked goods, candy and even cosmetics and pet foods.

Other countries --  such as Cambodia, Myanmar and Laos are quite undeveloped compared to the rest.  But, they also are considered some of the regional countries with the most potential.  They are huge commodity producing countries with vast natural resources.    Food industries from Singapore, Malaysia and Thailand are setting up operations in places like Cambodia where they can benefit from lower cost labor and ample energy and raw materials.  Brunei is a super rich oil producing country run by the Sultan of Brunei.  Some of the leading food companies in the region are owned by the country's leader.

Conclusion:
While the focus of our USHBC activities will remain on the mega markets of Brazil, China, India and China and core markets like Japan, South Korea and Taiwan -- we will also approach the emerging markets of the ASEAN.

Posted by Blueberryguy at 1:50 PM