A salute to the Nut Raj!


Gunjan Jain, (the Nut Raj) from India is an innovator in dried fruit and nut production, sales and marketing.  Two decades ago the action was in the dark always of the dried fruit markets or bazaars.  Gunjan is a fourth generation walnut grower and processor in the Jammu Kashmir state in the North of India.  He was encouraged by his grandfather to come to America -- as he did years ago to study dried fruit and nut marketing.  I was impressed when he called me out of the blue and then after three hours of public transit -- arrived at my office!   Gunjan's vision was to take the product to the consumer.  He developed delivery systems for ordering product via phone and e mail -- way before there was an internet.  Online sales followed.  He began servicing the newly developed grocery trade all over India.  (Grocery stores were not common 20 years ago).  He studied the health benefits of dried fruits and nuts and then began to use this valuable information on the pack and in advertising and media.  He also began marketing dried fruits and nuts to food processors, for baking, confectionery and snacks.   Foodservice and Ayurveda have followed.

Gunjan was one of the first -- if not the first-- company in India to import dried blueberries from the USA! 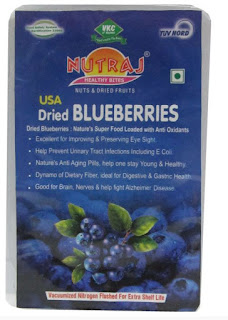 Now -- Look at the latest development.   The Nut Lounge. A great place to sample dried blueberries too! 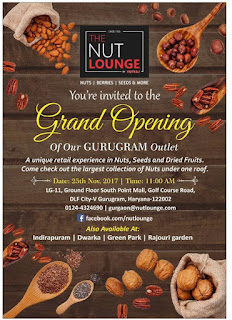 Posted by Blueberryguy at 10:50 AM