Hitting the BRICS with Blueberries 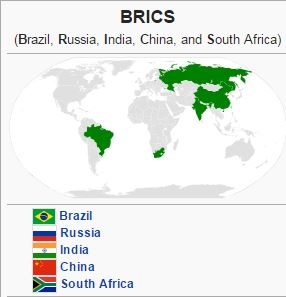 In 2014 USHBC announced a marketing initiative to drive highbush blueberry exports to the top five economies and population centers of the world.   Export marketing consultant Thomas J. Payne (Me) -- called it "big game hunting," and going after the "high value targets!"

Ending year two of the Blueberry BRICS -- here is how we are doing:

Brazil.   This country of 200 Million is struggling financially -- at the same time has been a bright star for blueberry exports.  Fresh sales have risen -- big surprise has been process.   Frozen blueberry sales have topped 200,000 kg and almost half million lbs!   USHBC has been systematically approaching Brazilian food processors.   Blueberries fit into the food as medicine and health food obsession of the massive Brazilian food industry.   What are the prospects.   Even in uncertain economic conditions, the Brazilian food industry is  doing well with domestic products and exports.    Products such as dried blueberries for snacks and juice concentrate are also in demand.

Russia.  You can't win them all...We are still restricted from the Russian Federation due to the current political situation.    At the same time we are seeing more blueberry containing products in Russia in the last two years.

India.   This sub-continent of 1.3 billion population has been a prime target for blueberry market development.   A small segment of this huge population has the wealth to purchase expensive items like blueberries.    And the middle class is on the rise.    USHBC started promoting blueberries in online media and PR and all of a sudden articles have been appearing in publications such as the Times of India --the largest English language newspaper in the world -- touting the benefits of blueberries.    USHBC conducted retail promotions in supermarkets featuring a hugely popular Master Chef Ranveer Brar.   With rising consumer demand, USHBC approached food manufacturers with frozen and dried blueberries -- and tings started to click!   India now imports more than a 100,000 kg of blueberries yearly.   (220,000 lbs)  This is a good start and note than one of the fastest growing categories is ultra-high value dried blueberries.   It takes 3.5 kg of frozen blueberries to make 1 kg of dried!

China.   We all know that China will someday become the top export market for highbush blueberries.   This massive country of 1.4 billion has proven a tough market to crack -- but well worth the effort.   Fresh blueberries from the USA are currently not allowed.   This may change in the near future and negotiations are underway between our two governments.    Processed blueberries are also a challenge with high duties and difficulties at ports with imports.   USHBC is working with the Chinese food industry to prime the pump for frozen imports.    We are meeting one on one, providing samples and providing technical assistance.    Little by little we are making progress.   We see some big advances in the near future and will keep pushing this market!

South Africa:  This is a long range market for US blueberries.  Currently we are restricted for fresh blueberries, and we currently have a request for market access.    Once we can get some exposure in the fresh business, we believe that the process market will also open up.    It is not a priority market, but definitely on our radar screen!


So, that is what is up on the BRICS!


Posted by Blueberryguy at 2:30 PM