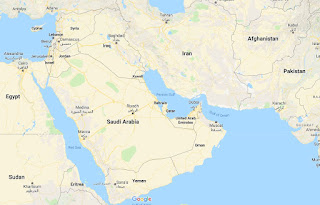 The USHBC strategic plan directs us to "expand existing and markets and to seek out and explore and build new US and international markets for food and non food uses of blueberries." 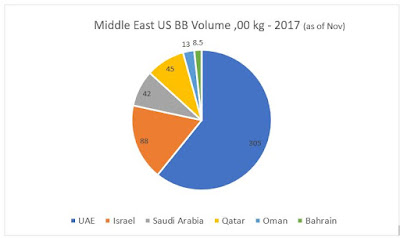 The Middle East including the Gulf States shown above have an estimated population of more than 400 million.   It contains countries with some of the highest per capita income in the world and a consumer base open to consumption of new things .   (of course a small portion of the population has buying power for consumer goods) The populations are also supplemented with large numbers of Western Expats and guest workers from India, Philippines and other countries.

The Middle East has been a pleasant surprise for US blueberry market development.  In 2012 when we attended our first Gulfood exposition in Dubai – we had do explain what a blueberry was.
Each year, we could feel a growing interest and demand more and more blueberries in grocery stores around the region, and in food products as ingredients.  The key demand determinant is health (diabetes) and beauty (skin care) 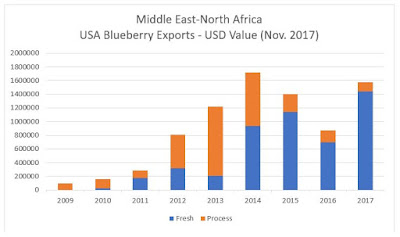 We have seen steady growth from near zero sales in 2008 to more than 1.6 million dollars in 2017 so far this year.    Most fresh are routed through Dubai, United Arab Emirates for grocery and hotel foodservice.

Demand Determinants:
Almost each day a new article appears in a newspaper or magazine including news about blueberries.   At first, this was just in Dubai (United Arab Emirates) but now interest has spread all over the Gulf.   Next countries will include Pakistan and Iran as well as other Gulf states.  The food processing industry is also developing with bakeries, dairy and jam manufacturing – especially in Saudi Arabia.

Read Arabic?  Most businesspersons in the region read English, but we are ready just in case. 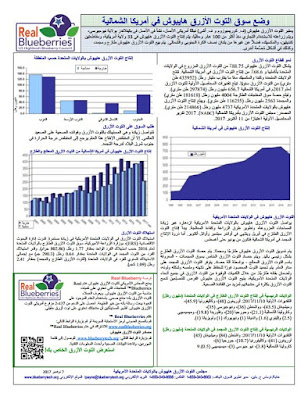 See you in Dubai!

Posted by Blueberryguy at 12:54 PM