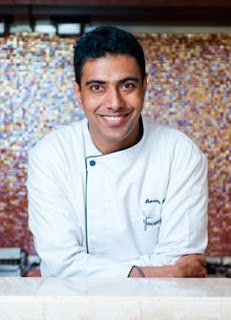 Millions of Indians tune in regularly to the wildly popular television program Master Chef India which includes judge and handsome super-star chef Ranveer Brar.  Now -- he has joined the USHBC effort to convert the billion population nation to fresh blueberries.
Chef Brar is now taken on the title of "Blueberry Ambassador" and will be conducting activities all over during the upcoming fresh season.   Chef Brar recently completed a photo shoot with blueberries, will be making celebrity appearances at grocery stores during the fresh season as well as encouraging blueberry use on his show!   USHBC has more than 500 in-store fresh blueberry promotions in motion at the top store chains all over ..  By the way -- he just loves blueberries and is passionate about spreading the word to his "foodie followers!"  Stay tuned for photos of Master Chef Brar in action.   Look for those import statistics to soar!
(Caption: Chef Ranveer Brar is one of the most popular television celebrities in -- Now USHBC Fresh Blueberry Ambassador!)

BIO:  Ranveer Brar is an Indian chef, TV show host and food stylist. His television shows include Breakfast Xpress, Snack Attack, Homemade, The Great Indian Rasoi, Thank God It's Fryday and Health Bhi Taste Bhi. He is also one of the judges for season four of MasterChef India, which is based on the British competitive cooking game show, MasterChef, alongside fellow chefs Sanjeev Kapoor and Vikas Khanna.

Posted by Blueberryguy at 11:47 AM