Here is one for all of you blueberry mascot fans.  In the mid 1990s the North American Blueberry Council developed a targeted ad campaign in Japan  featuring our own Mr. Baseball!   As you all know, baseball is the national sport of Japan and at the time of the ad, there were more than 10 million amateur baseball teams in the country!   Mr. Baseball challenged baseball players to write in for a free sample of dried blueberries.  More than 160,000 small samples were distributed and advertisements ran in the top two baseball magazines in Japan.  At the end of the season we received hundreds of notes from players claiming that their batting averages rose on account of the blueberry consumption.  NABC also provided blueberry samples to the hugely popular Hanshin Tigers professional team in Osaka.    Most important, the Blueberry Guy (me) got some front row VIP seats at a Tigers-Giants game at Koshien Stadium! 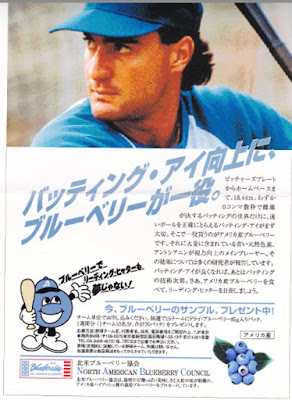 Posted by Blueberryguy at 5:58 PM