By Popular Demand - Here is the Brigadeiro Recipe! 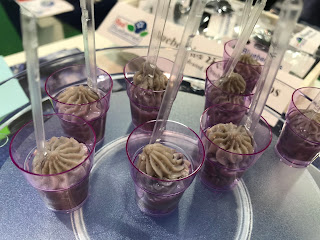 Food Ingredients South America (FISA) was a hit!  For three days, the Blueberry FoodTech team met a continual stream of interesting companies!    To liven things up, we served a traditional Brazilian Brigadeiro treat.   You all know that Brazilians love things sweet.  This is the leading sugar producing country in the world.  This traditional confectionery is made with sugar, condensed milk and now--Blueberries!

The World is Flat...FISA is an international exhibition of food ingredient suppliers and regional food industries.  This included a large delegation of exhibitors from China (see mascot post) and India.   On day one our neighbor booth from Mumbai came by and tasted the blueberry brigadeiro. They loved it and came back again and again.  Evidently the taste of the condensed milk and sugar is similar to the Indian ice cream treat called "kulfi."  Word spread throughout the Indian exhibitors and dozens of new "brigadeiro friends" stopped in again and again. Some pledged to return to India and give it a try -- with blueberries of course!

Background:  The Brigadeiro is a "traditional" sweet which was actually created in the 1940s and has grown in popularity since.   The name is traced back to a national election where a Military Brigadier General named Eduardo Gomes was an extremely popular candidate.  The campaign slogan aimed at female voters: "Vote for the Brigadier General who is handsome and single."  The ultra-sweet Brigadeiro confection was created during the campaign as a fund raiser at election rallies.   The candy was a big success, but unfortunately the candidate lost the election.  But the candy grew in popularity and the name Brigadeiro has stuck!  Typically this is a home-made candy and every family has a home recipe.   It is also a commercial confectionery filling that is sold in high-end retail shops.  Brazilians are normally food purists when it comes to national items like caipirinhas (rum beverage) and feijoada (bean stew)  -- but a new generation of consumer loves to experiment with new flavors:  Introducing  the blueberry brigadeiro!

Brigadeiro in a cup with blueberry and milk powder.


For the blueberry jam:


a pinch of  salt


1. In a saucepan, combine frozen blueberries, lemon and blueberry concentrate juice. Bring to a simmer and cook over medium-low heat until the liquid has started thicken. Crush the blueberries with the back of a spoon to release the juice of the fruit. Set aside.


2. Combine butter, salt and condensed milk in a saucepan over low heat. Stir well until butter is melted.


3. Add table cream and powder milk. Continuously stir until mixture thickens and you see the bottom of the pan for a couple of seconds before the mixture levels out again. Add the blueberry jam and stir until well combined.


4. Remove from heat, transfer to a plate and let it cool to room temperature.

Posted by Blueberryguy at 11:49 AM