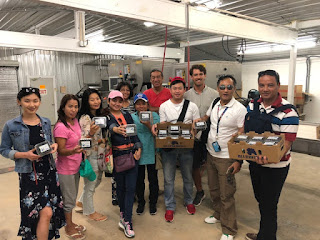 Myanmar team visits JD Farms in Poplarville, Mississippi!  (Don is in the red shirt in the very back!)

I love it when a plan comes together.   Actually we did not plan this one but it sure came together thanks to a lot of old friends.

>USHBC exhibited at the International Dairy, Deli, Bakery Association (IDDBA) annual meeting and exposition in New Orleans.   A great gathering of the food industry and you will read more about this in a future blog post.

>A change in plans.  We met with our friend Enrique Rubio who covers the Midwest for this great organization that is always looking out for the interest of the blueberry industry.   Enrique informed me that there was a USDA Cochrane mission in town, from of all places Myanmar!  Bingo!  Hana out Vietnam FoodTech was just in Myanmar attending the Food and Hotel Myanmar.   The Cochrane program is a special activity where food professionals from developing countries like Myanmar can visit the USA for training.   USHBC is always on the hunt to intercept these groups which include the current and future food industry leaders.

>Enrique called the coordinator and next day a great group of Burmese visitors were gathered at the USHBC booth.   This included two representatives of CityMart holdings which is the leading retailer in Myanmar.  Others included major importers, food distributors and bakers and suppliers.  These are exactly the contacts that will make things happen in this up and coming Southeast Asian nation formerly called Burma.
>The group tasted the local Mississippi-grown blueberries which we were sampling at the booth and opportunity knocked  -- we needed to get these folks up to Poplarville, Mississippithe blueberry capital of the South.  (about 1.5  hour north of New Orleans) We were on the way!


>Called Don  Van De Werken of J& D Farms of course.   I know that a van load of Burmese visitors was the last thing he needed during harvest -- but he graciously said, "I'd love to meet the group."  Don is a pioneer in exporting fresh and frozen blueberries to India.

>Don, a true Southern Gentleman and Internationalist dropped everything and hosted the group to his farm.  Everyone loves to pick and learned all about the soon-to-be Burmese favorite!

>Next the group journeyed down the road to hook up with my good friend Ethan Goggans of Sandy Run Farm.  He escorted the group down the road to Miss-Lou Coop where they saw blueberries packed.  Luis Monterde runs, who we all know from USUBC runs Mis-Lou Cooperative which runs like a Swiss Watch.  The group was amazed!


>Then out to Sandy Run Farm with Ethan for one final pick!


Only regret -- the group had to get back to New Orelans, for an appointment.  All wanted to stay or move in with Ethan and his wonderful dogs which were a hit!  We had a catfish fry planed, but we will need to do this next time.  The group did invite us all for some traditional Burmese curry catfish when we visit Yangon!

What could top off this perfect day?

USDA-APHIS announced that fresh blueberries are now allowed into Myanmar!   More on that later.


Posted by Blueberryguy at 9:17 AM